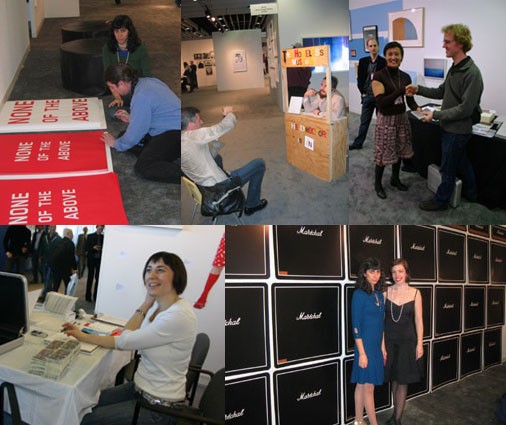 Following our last year's very successful presentations featuring performances and interventions by the New Humans and the Red Shoe Delivery Service, plus everyone's favorite video by Gianni Motti featuring George W. Bush at the Armory Show, this year the S I was thrilled to have had opportunity to present our program to a wide, international audience from within the halls of the Armory.??The S I's spirit of innovative contemporary art was showcased in our booth and with several installations and interventions within the context of the fair, including a gothic wall of sound installation by artists Valentin Carron and Charles-François Duplain, the make-shift HQ of Filip Noterdaeme the Director of the Homeless Museum, squatting at the S I's booth, and a project that truly subverted the economics of the Armory called Neutral Capital by artist Peter Simensky. The newest S I artist editions was also debuted at the Armory Show, with a work related to the exhibition NONE OF THE ABOVE by John Armleder.
We had many visitors to our exciting S I outpost, and with lots new fans, members and supporters of our program, we are happy to say that the S I's participation in the 2005 Armory Show was a dazzling success, introducing our cutting-edge program to a massive audience.